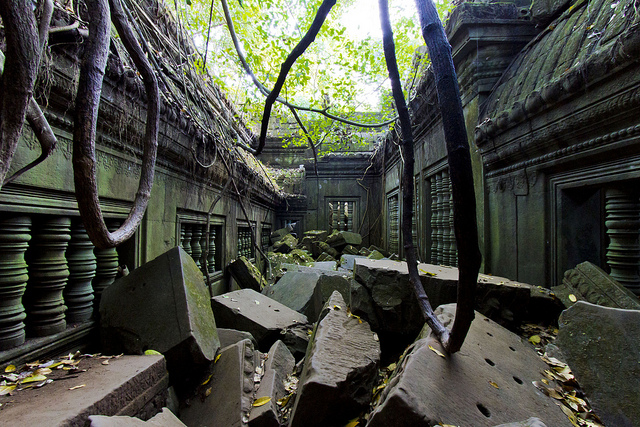 More than a million people visit the Angkor Archaeological Park each year to see the ruins of the ancient Khmer Empire.  The Angkor area contains more than a thousand temples, most unearthed by French explorers after centuries of abandonment.  Starting in 1907, teams of archaeologists have worked to uncover and restore these temples to their former glory.  Today, the temples are protected as historical treasures and their restoration has become an international effort.

With so many temples in the area, it’s impossible to visit every single temple.  Once you’ve seen the three most popular temples (Angkor Wat, Bayon, and Ta Prohm) try to make time to visit these other awe-inspiring temples as well.  They’re beautiful, less crowded, and if you’re lucky, less overrun by bracelet-hawking children. 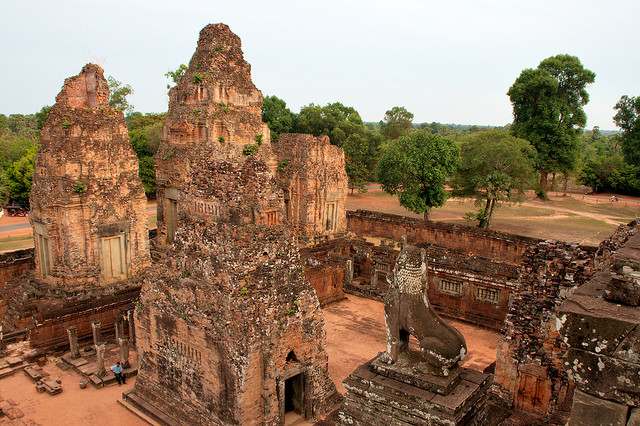 This temple was built in the 10th century just south of East Baray, and is believed to have been used as a funeral temple.  Pre Rup has two long, unconnected galleries on the sides, unusual in that they are not continuous around the entire temple; this is a distinctive feature of Khmer 10th century architecture, and is not commonly found among the park’s temples.  The temple’s square pyramid has three tiers, the lowest measuring 50m at its base and surrounded by 12 equally-spaced shrines.  The top tier measures 35m in each direction, and is topped by five towers, one at each corner and one in the center.  The climb to the summit is steep, but the view is worth it.

Located less than a kilometer north of Pre Rup is East Mebon, another 10th century temple.  It was originally built on an artificial island in East Baray (meaning “East Reservoir”) but the reservoir is now dry.  The layout of East Mebon is similar to Pre Rup, although not as tall.  East Mebon’s claim to fame is its collection of beautiful carved elephants, each two meters high and carved from a single stone, which stand guard at the corners of the first and second tiers.  The most intact elephant is in the southwest corner. 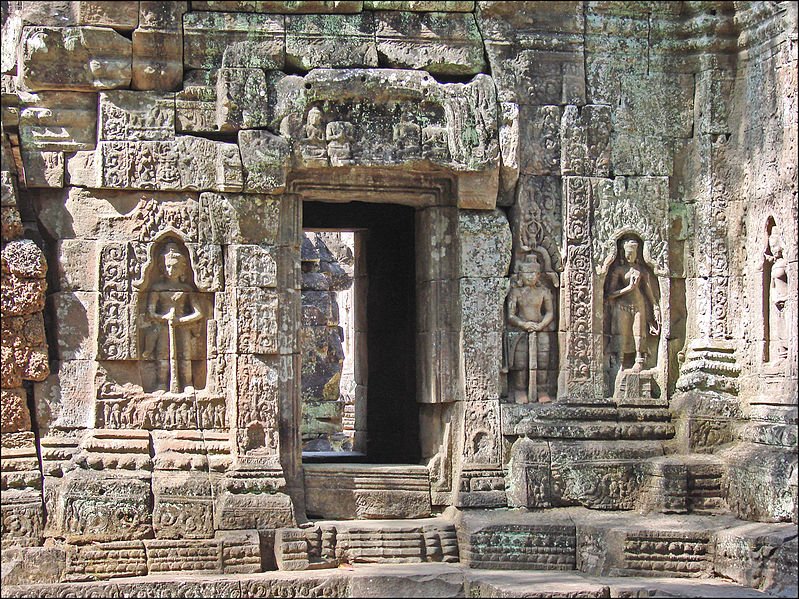 This temple isn’t terribly popular, but shares some similarities with the most-visited temples.  Like Bayon, Ta Som’s gopuras (entrance buildings) have square towers with faces carved on each side.  And like Ta Prohm, this temple has several structures and gopuras (most notably the eastern outer gopura) that have been overgrown by enormous fig trees.  Ta Som was built in the 12th century, and contains some gorgeous reliefs and carvings.  It is usually wonderfully uncrowded, and can be a breath of fresh air after visiting the more popular temples.

Another 12th century temple, Preah Khan is located northeast of the walled city of Angkor Thom.  It’s a flat (one-story) temple, and was once an important organizational and educational center where nearly 100,000 monks, officials, servants, teachers, and dancers worked.  It’s a largely unrestored site, still overgrown with trees and vegetation, so walking around Preah Khan today is mostly the same experience as that of a French explorer a century ago.  This temple is home to numerous carvings of dancers with lotus flowers, called apsara dancers.  Preah Khan is especially beautiful in the rainy season, when the vegetation is lush and the stones are covered in colorful moss. 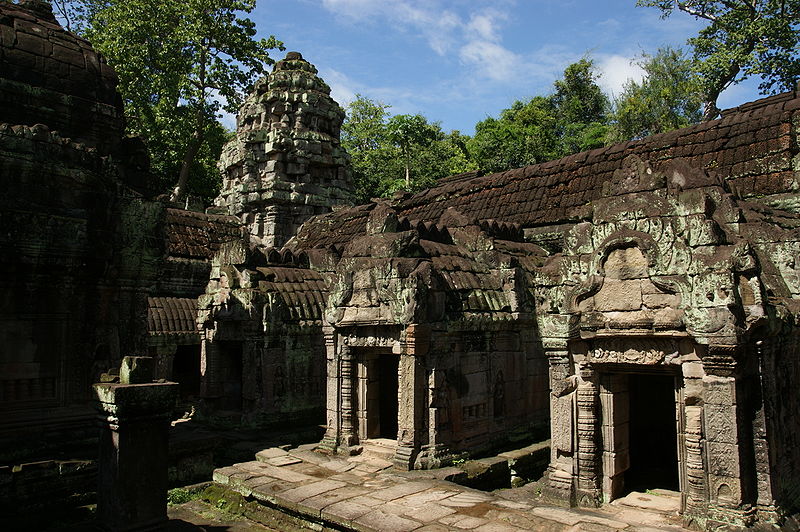 Save the best for last, because once you’ve seen Beng Mealea, you may be slightly bored by everything else.  This incredible temple isn’t actually inside the Angkor Archaeological Park—it’s about two hours away, actually.  Its name means “lotus pond,” and in the rainy season it’s easy to see why: the entire floor of the temple turns into a pond.  Because of this, most of the walking around this temple is done on boardwalks, even in the dry season.  This temple features long galleries, raised libraries outside of the main walls, and incredible carvings and architecture.  It’s a largely unrestored site, and nowhere in Cambodia will you feel more like a true explorer than at Beng Mealea.

Because of the distance, this site is generally uncrowded by tourists and relatively free of bracelet-hawking children.  Nearly all visitors to Beng Mealea report that this is their favorite temple, so don’t skip it!  Hire a car (not a tuk-tuk) and enjoy the beautiful rice paddies and Cambodian homes as you ride through the countryside.  Visit Beng Mealea in the morning and consider stopping by the Angkor Centre for Conservation and Biodiversity on the way back for an afternoon tour of the country’s native and endangered wildlife.